Back to News
ENSS Student adds splash of colour

Presqu'ile has been fortunate in having a number of fine co-op students from ENSS work at the Park over the years, but the Park was particularly fortunate in 2010.

Kristina Osborne, a grade 11 student, spent 10 to 15 hours a week at the Park from January through to late June. Like many students Kristina cheerfully tackled a number of tasks, but her real love and special skill was in drawing and illustration. This meshed nicely with Presqu'ile's early spring project to re-design the Nature Centre for summer 2010.

Kristina was able to greatly enhance a number of the new displays with nature scene back-drops and illuminated signs. Her efforts went a long way to providing that little extra spark and dash of colour to the displays. We hope everyone gets a chance to come in and see the new displays and Kristina's contributions.

Kristina is spending the summer in the Junior Ranger program in the Sault Ste Marie area and we at the Park certainly wish her well and look forward to perhaps having her back at the Park in the future.


Kristina in front of a nature backdrop she contributed too, holding one of her illuminated Nature Centre signs.

Kristina also painted some new turtle caution signs that will be visible on park roads every spring and fall. 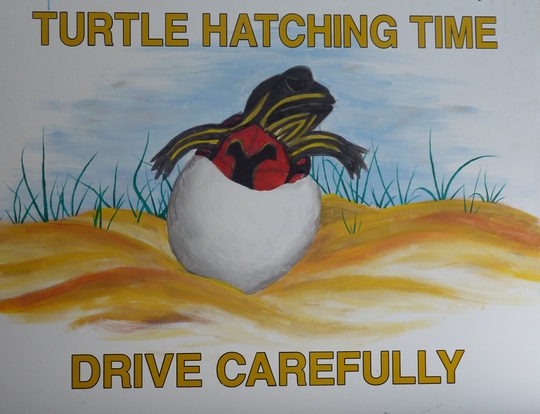