Walking the trails at Presqu?ile when the icy, bone chilling winds are coming off of Lake Ontario are not for the "faint of heart?. But if you can layer on enough clothes and bring along a steaming hot thermos it is well worth the effort.

Our trek today started on the beach shoreline and we literally had to hold onto our hats due to the blustery winds. Canada Geese were lined up at the edge of the shoreline, and a fast flying flock of Red-breasted Mergansers dipped dangerously close to the waves that were crashing towards the shore. We spotted a large fish carcass that had been stripped down to the bare bones on the sandy beach.

Botulism, a natural occurring bacterium that is found in the lake?s sediments, does kill some fish and birds here every fall. We often see some along the beach in autumn. But fish and birds do die for other reasons and it is hard to tell whether this fish died of botulism or something else. In any case due to its well-weathered state, it certainly wasn?t a recent causality and thankfully, unlike Lake Huron, few creatures have died of botulism on Lake Ontario this fall.

We traveled to the first picnic area and ate our lunch in the warmth of the car, watching wave after wave break onto the rocky shoreline. My husband saw something in the grass and we discovered a barely alive Monarch Butterfly.

I have to admit that I picked it up gently and took it into the car to warm it up in my hand before placing in a sheltered area, along with one of the few remaining dandelions to be found.

Checking the range map also showed that Spruce Grouse are birds of the boreal forest and not found south of Algonquin Park, so all was right with the world, though why this bird was so "tame? remains a bit of a mystery.

Our final walk of the day was the Marsh Boardwalk, a trail where we would always bring our children at the end of the day to settle them down before campfire and bedtime. I was astounded to see how low the water levels were. When I got back home I pulled up a photograph from June 2011 to compare. While a startling contrast, it is not unusual. The interpretive panel at this site tells the story of how Lake Ontario rises and falls in a fairly regular pattern of about a meter every year.High water is in June and low water in December, so my two pictures this year pretty much show the two extremes., about 80cm difference.  While pretty normal a meter seems to make a big difference at this location. 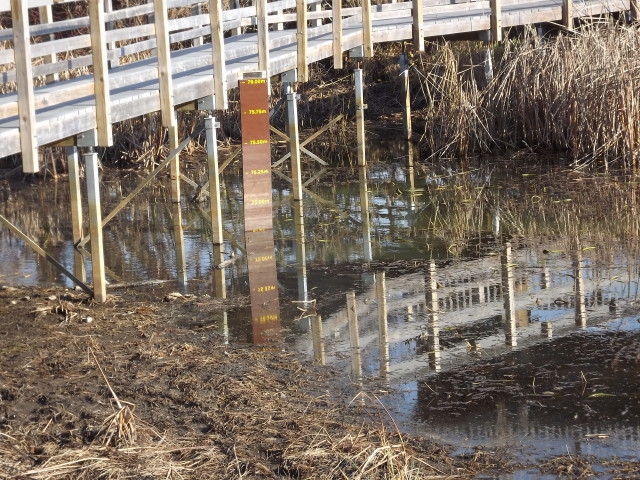 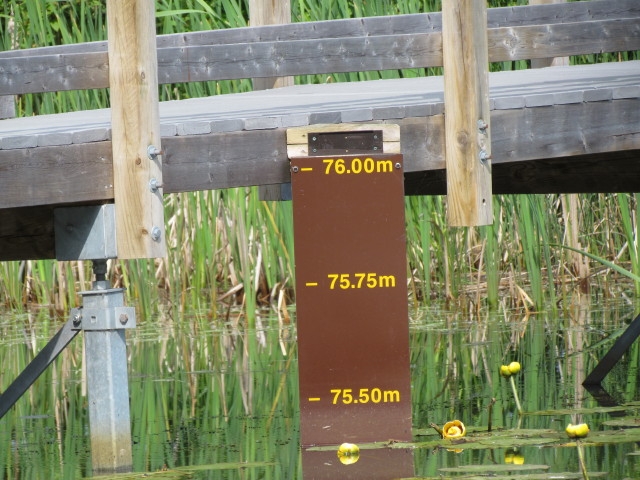 Looking out my window at the light covering of snow we received overnight, (ed note: Karen lives in the Lindsay area, no snow here ? yet) makes me think of future snow shoeing adventures in the Park in the coming months.
Posted by @ 03:55 pm
Share
Comments
Login to post comments.
Categories
Archives
/park-blog.php