Despite the hot humid weather, June and July so far have been perfect for discovering Presqu'ile Provincial Park. Driving into the Park early one morning in June, I saw something oddly shaped on the road ahead. To my amazement it was a bear cub. By the time I pulled over and grabbed my camera it had disappeared into the underbrush of the Panne. Immediately I turned around and went to the Park Office, situated at the entrance and shared what I had just seen.

You can't walk very far at Presqu'ile these past few weeks without seeing vividly colored black and orange Monarch Butterflies gracefully flying by. They seem to favor the Panne area, however I have been lucky to find small clusters of them on Aitkens Road and in the back meadow at the first day use area. At the beginning of June they enjoyed the Viper's Bugloss wildflower, Honeysuckle, and Dandilions, but once the Milkweed and Swamp Milkweed bloomed, this became their flower of choice.

The Milkweed plants have been in abundance this year throughout the park. There were times on my walks when their lightly scented fragrance filled the air all around me. What is really neat is all of the insects that live tucked way in every nook and cranny of the plant. From European Earwigs, Monarch Caterpillars munching away at the leaves, Milkweed Beetles and this spider that I found. I havn't figured out what type it is yet, but it seemed quite comfortable to be photographed. 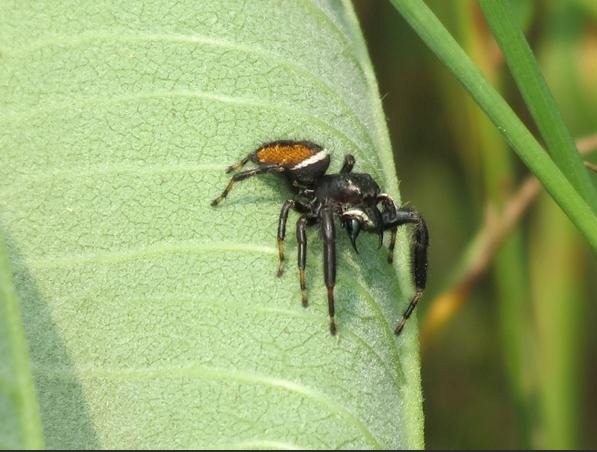 A book that I find useful is "Milkweed, Monarchs and More  A field guide to the invertevrate community in the milkweed patch. It is full of photographs and useful information for the budding naturalist.

at the Lighthouse is a favorite spot for the beginning and expert birders to enjoy. In June, if you are lucky enough, you might hear the crazy call of a Gray Catbird, spot a Ruby-throated Hummingbird or be amazed by the colors of the Scarlet Tanager. I was lucky enough to find a Yellow Warblers nest with five eggs. One egg seemed much larger than the others, and I wondered if a Brown-headed Cowbird was the culprit. I worried about the safety of the nest because it was totally out in the open for anyone, human or predator to find. But, the next week when I peeked in there were four small Yellow Warbler babies, and one very large and vocal Brown-headed Cowbird baby. The next time I came to the park, the nest was empty and hopefully all survived. Later on that day, while on the Marsh Boardwalk I heard loud "peeping. There were two adult Pied-billed Grebes, a new species for me and three chicks. Now the chicks are the oddest looking babies ever. I would never think that they belonged to this parent by just looking at them.

Sometimes I find that if I take things slowly, that I discover more about nature. I'm always watchful for the Eastern Chipmunks, Red Squirrels, White-tailed Deer and Eastern Garter Snakes that either dash out or slither across the road. But at this time of year, I especially watch out for the slowly moving large Snapping Turtles who cross the main road over from the marsh to lay their eggs. This large turtle decided to dig two holes right in front of the transformer. I wonder how the turtles that hatch manage to find their way back to the safety of the water. 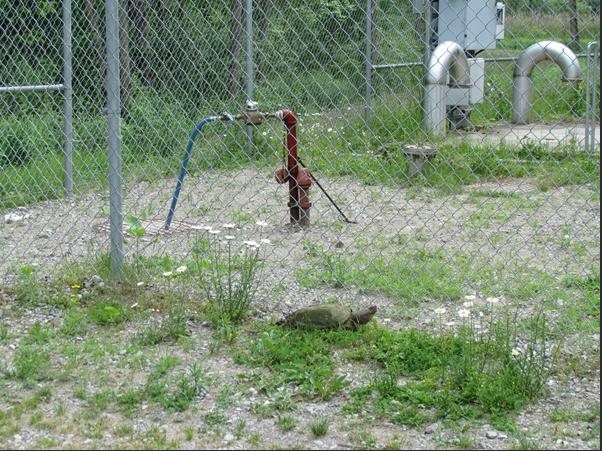 While strolling along the shoreline last week, letting my dog Jesse have a play and well deserved drink, I saw the funniest insect or was it a bird? darting about a stand of milkweed. I wasn't sure if it was a Hummingbird or a very large Bumblebee. As I crept closer I realized that what I was seeing was a Snowberry Clearwing Moth. It was so intent on chasing away two Monarch Butterflies and feeding from the sweet nectar that I was able to get very close to take this photograph.

It doesn't take much to interest me, whether it is the young Red Fox I spotted trotting along the main road with an Eastern Chipmunk in its mouth, the Great Blue Heron that caught three large Catfish in a row or watching an American Woodcock dig amongst the leaves for grubs, I always learn something new.