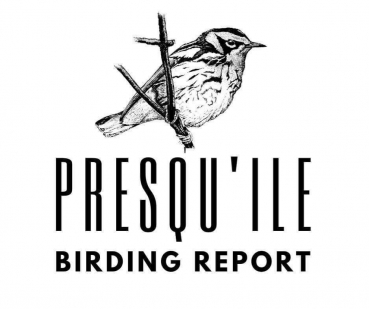 OVERVIEW: There has been almost no birding coverage then past few weeks but the discovery of a (mostly) Barrow’s Goldeneye by the lighthouse livened things up.  A few signs of spring were evident such as the arrival of Ring-billed Gulls to the area, frequent singing by Cardinals and House Finches and some “new” Red-winged Blackbirds. Presqu’ile Bay is frequently filled with ice but breaks open depending on wind and wave action so ducks move around a lot.

American Black Duck: One was seen on 11 Feb.

Common Goldeneye: Another common duck presently with a high count of 200 on 12 Feb.

Barrow’s x Common Goldeneye: A male that is suspected of being a hybrid was discovered off the lighthouse on 12 Feb and was seen by a number of people that day and the following day but not since despite looking.  It may still be in the area as birding coverage is very limited.  It looks closest to a Barrow’s but the white facial marking is more round at the base (like a Common) and the black spur going down from the front of the wing is shorter than it should be.

Red-breasted Merganser: Twenty on 12 Feb is the highest count in weeks.

Bald Eagle:  Present in the area through the week with a high of three on 16 Feb

Northern Harrier: One was seen on 12 Feb.

Mourning Dove: Up to 22 birds were visiting one Bayshore Rd. feeder through the week.

Hermit Thrush: One seen on 12 Feb represents a rare February record.  In the last few decades this species has been seen more often in early winter but there are still few records from the dead of winter.

Cedar Waxwing: This species has been unusually scarce this winter so 13 on 13 Feb was a lucky (?) find.

Red-winged Blackbird: A flock of up to nine was present through the week at feeders along Bayshore then increased to 12 birds on 15 Feb and 14 on 17 Feb.

Purple Finch:  Numbers have been picking up over the last month with eight at one feeder on 17 Feb.

Directions: Presqu’ile Provincial Park is located south of Brighton on the north shore of Lake Ontario.  It is well signed from either Hwy. 401 or Cty. Rd. 2.

Please remember a seasonal or daily permit is required when visiting Presqu'ile. You can purchase a daily vehicle permit online in advance of your visit online or by phone. Ontario Parks recommends you make a reservation during periods of high visitation to guarantee entry. Reserve here: